Borne out of an inspirational partnership between an egg producer, a food developer, a sandwich processor and a leading international airline, an innovative, sustainable supply chain for higher welfare chicken was created utilising the meat from end-of-lay hens. As a result, from 2013, KLM Royal Dutch Airlines was able to start offering higher welfare chicken sandwiches on all of its Western European flights using the meat from ex-laying hens from the ‘Rondeel’ system.

Rondeel is an enriched barn system for laying hens, owned by the Dutch Vencomatic Group. The system offers both day and night quarters which are designed to fulfil the hen’s behavioural needs, such as nesting, perching and dustbathing, in a varied environment. The hens typically finish laying at 76 weeks when they are slaughtered and the meat is usually exported overseas for generic products such as soup. There are currently four Rondeel farms in the Netherlands, and this higher welfare system is also available for franchise.

Click here to view an outline of the Rondeel system for laying hens.

Creating sustainability in the layer industry

Rondeel has always been interested in creating a sustainable future for the layer industry. Together with food development company Kokreateur, in 2011 Rondeel began dicussions with sandwich producers Qizini to investigate how they could utilise the meat from their hens when they had come to the end of their laying period.

This was the start of an innovative new supply chain which was co-created by both companies to create a more sustainable market for chicken meat from ex-laying hens.

In May 2012, Rondeel invested 50,000 euros on some research to test the feasibility of using their ex-layers for chicken meat. By the end of 2012, Qizini – who has been making convenience products such as sandwiches, wraps, paninis, grilled sandwiches and salads since 1997 – officially joined the project.

Qizini strives to use natural ingredients wherever possible and limits its use of meat to animals that have been raised under humane conditions. After further discussions and feedback from Rondeel, Qizini believed this was a concept worth investing in.

Qizini’s new product developers have extensive experience of the taste preferences of airline passengers, having been a long-standing supplier to KLM. As part of this partnership they undertook a number of in-house taste trials to ensure the final product would be well received by consumers.

The partners discovered that using an older bird tends to make the meat darker, with a much stronger flavour than the meat normally produced from broiler chickens. Herbs were added in the meat cooking process to get the right flavour and colour.

Various taste trials were conducted to ensure that the taste, colour and texture of the meat met consumer acceptability whilst still being affordable. After three months of trials and adjustments an end product was achieved and accepted by both companies.

Not only had they developed a product that was fully accepted under taste trials, they had developed a thinly sliced meat from a 2kg bird that produced more end-product than a normal broiler chicken – making affordability stretch even further.

It was a risk to invest in a project that may not have worked. We conducted many taste trials until the product was right but all the time we had 100% belief that the concept was viable and that we would find a solution. It is our company ethos to provide our hens with the best life possible and we wanted to develop a more sustainable concept which meant making their lives more meaningful than just laying eggs.

Qizini has been a long-term supplier to KLM for the sandwiches served on-board European flights. In 2013, as part of a new tender for its sandwiches, KLM challenged Qizini to include chicken meat from a higher welfare system, in line with KLM’s Good Chicken Award from Compassion in World Farming. In addition to meeting these higher welfare standards, Qizini developed a new concept of ‘local farmers feeding the world’ where all ingredients used in the sandwiches were locally sourced, ethical produce which met KLM’s wider sustainability goals and that could ‘tell a story’.

In response to the tender, Qizini invested in a marketing video to ‘sell in’ its product offer by ‘telling the story’ of the provenance of all the ingredients used in their sandwiches, including the higher welfare chicken meat from the Rondeel system.

As one of KLM’s suppliers, we know that ethical sourcing is key for the food they offer to customers on board their flights. We were very excited about the prospect of being able to offer something a bit different – a product which truly values the life of laying hens, which are raised under such humane conditions. All of the ingredients that go into our sandwiches for KLM use the most natural, local ingredients and through this partnership we are able to use local farmers to feed the world.

Qizini supplies approximately 3.5m chicken sandwiches to KLM each year, which equates to 80-90% of the end-of-lay hens from the Rondeel system (approximately 90,000 hens per year). The whole bird is utilised within this supply chain as Qizini uses any excess birds for its other product ranges outside the KLM sandwich supply.

KLM is ambitious about its Corporate Social Responsibility and innovation is a top priority. As such they are in constant dialogue with their partners and suppliers to ensure their social and environmental commitments are fulfilled.

The key driver behind this project was the real commitment from all parties involved. Through its tender process, KLM helped create the demand for higher welfare chicken. By working in close partnership with its suppliers they had full transparency of the supply chain for their sandwiches and were able to source a viable, sustainable product that met all their ethical goals, and one which has been warmly received by KLM’s customers.

We loved the concept of using this chicken meat in our sandwiches. It’s one that truly values the hens’ lives and is a great story to tell. By rationalising our on-board food offer and reducing the variety of sandwich flavours we use, we are now able to provide our customers high quality, ethical food at the same cost.

We feel it’s important to share with our customers that we source ethical ingredients for our in-flight meals and communicate this clearly on the sandwiches we serve on board. Interestingly, since we have put our new sandwich supply in place, it’s the first time we have received any feedback from our customers – via our crew, letters and emails – and it’s all been positive. Through this partnership, we have been able to meet our sustainability goals affordably and will strive to seek out further sustainable sourcing opportunities in future.

In addition to animal welfare and ethically sourced ingredients, KLM also focusses on sustainable fish, soy and palm oil. Requirements on these ingredients that are also met by Qizini.

By working together, Rondeel, Kokreateur and Qizini were able to provide KLM with a secure higher welfare chicken supply which was affordable for all and which met all their aims of supplying sustainable food for the future, and more importantly making the most of the laying hens’ lives.

There were three key elements to the success of this partnership:

Rondeel is an enriched barn system for laying hens, owned by the Dutch Vencomatic Group. Vencomatic Group offers a full range of innovative systems for equipping modern poultry farms all over the world. They constantly look for alternative solutions, developing sustainable and poultry friendly products. The Vencomatic Group has over 350 committed employees who serve thousands of customers worldwide.

The Rondeel system accomodates chickens in an manner that pays close regard to both animal welfare and the environment, while also catering to all the birds’ natural requirements.

There are currently four Rondeel farms located in the Netherlands, and the system is also available for franchise. Rondeel eggs are sold to consumers in Albert Heijn retail stores, at an intermediate price between free-range and organic eggs. Rondeel eggs are also used in the well known dutch restaurant chain ‘La place’ and used in different catering organisations.

Kokreateur Inspiration develops its own food products and products for third parties. The company invents food concepts and develops new products that focus in particular on the use of raw materials such as egg, fish, dairy and meat, and the production processes involved to ensure the best tasting food for its partners and customers.

Qizini has been making convenience products such as sandwiches, wraps, paninis, grilled sandwiches and salads since 1997. The company strives to use natural ingredients wherever possible and limits its use of meat to animals that have been raised under humane conditions.

With approximately 400 employees in Germany, Belgium and France, Qizini supplies both leading Dutch and international customers with products under its own brand – Qizini – as well as under private labels. Its production facilities are located in Alphen aan de Rijn and Losser in The Netherlands.

Qizini products are available in supermarkets, food to go outlets, at petrol stations and also on board aircraft such as KLM

KLM Royal Dutch Airlines was founded on 7 October 1919 to serve the Netherlands and its colonies. Today KLM is the oldest airline still operating under its original name. KLM has been part of the AIR FRANCE KLM group since the merger in 2004.

Corporate Social Responsibility is vital to KLM’s pioneering position and CSR is embedded at all levels of the organisation. KLM is not only concerned with healthy commercial profits, but is also committed to a sustainable society and to care for the environment, both at home and abroad. For several years now, this has earned KLM the No. 1 listing in the Dow Jones Sustainability Index. 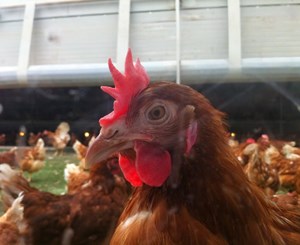 Borne out of an inspirational partnership between an egg producer, a food developer, a sandwich processor and a leading international airline, an innovative, sustainable supply chain for higher…